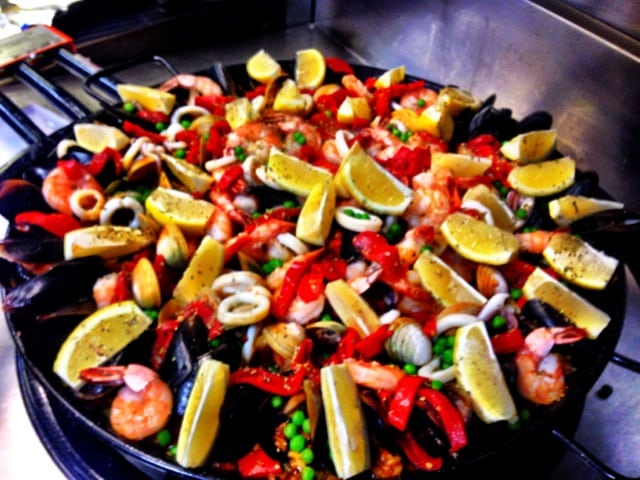 We are always trying to introduce new flavours to our paella menu, that’s why we have swapped out the basque paella for the new and exciting lamb paella. See our paella menu for all paella options.

Basque Country is located where Spain meets France on the Atlantic coast. It’s a gorgeously heart-shaped region and is also home to some of the most flavoursome food you will ever taste.The Basque area has both a French and Spanish feel, so the culinary outcome is a beautiful meld of these two popular cuisines. It is also heavily influenced by those who have settled the region from trade and exploration.

Historically the Basques in costal areas always fished but it wasn’t until the arrival of the Norse as well as the influence of Christianity’s dietary rules that seafood began to be consumed.

Basque paella incorporates the delicious abundance of fresh seafood from the Atlantic coast and this colourful and tasty dish gets its depth of flavour from Food Adventura’s secret seafood stock.

Yet it’s not just the flavours of the sea that page homage to its Basque origins. It’s the complimentary mix of fresh flavours incorporating fresh farm chicken and homemade chorizo which makes it a distinct stand out. These meaty flavours are intensified with the beautiful additions of paprika, saffron, garlic and white wine along with the textures of colourful vegetables.

Basque Paella can be happily accompanied by a range of drink options. Try it with a light, dry white wine such as a Vinho verde, or a sangiovese, or even a dry fino sherry – nothing too heavy or fruity as it takes away from the flavours of the paella. Other options such as a rosé-based sangria or even a lighter style beer like a pilsener work well – but nothing too heavy.

Basque in the afterglow of your event, when your guests rave about this show-stopping dish.