Five things every Spanish menu needs to include 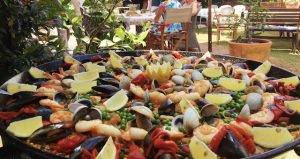 If there’s one thing that Spanish people know how to do, it’s cater for large groups. There is no such thing as ‘stingy’ in Spanish food culture. Cooking (and eating) is all about abundance and sharing a delicious experience with friends and family.

There’s also no such thing as a small party in Spain, with tradition dictating that every man and his dog (and neighbour, and beautiful single daughter, and second-Aunty twice removed) is invited to family gatherings.

So how on earth do you feed all these people? Bruno LaBorde from Food Adventura shares his five tips for keeping the masses happy in true Spanish style.

1. Jamón
Known to the rest of us good old fashioned ham, Serrano and Iberico are the two most popular – and expensive – types of ham favoured by the Spanish. Taking up to two years to cure, these types of ham are highly sought after and have a flavour closer to Italian prosciutto than the leg ham popular at most Aussie Christmases. In Spain, ham is served with rockmelon, on sandwiches with Manchego cheese, and as a key ingredient in croquettes.

2. Olives and olive oil
Olives are synonymous with Spain, with the Manzanilla olive – a green firm textured olive the size of a normal table grape – and the black olive being the main olives cultivated in Spain. What’s more, Spain is the world’s number one producer of table olives, with 40 per cent of the crop being consumed domestically. Olive oil is also extremely popular, with this Mediterranean pantry staple keeping Spanish hearts healthy for centuries.

3. Empanadas
These savoury parcels of pastry are to Spanish people what meat pies are to Australians. Usually filled with a combination of spiced meat and boiled eggs, they are a gluten-free vegan’s worst nightmare. For everyone else, they are a quick and easy snack suitable for breakfast, lunch and dinner. Forget the tomato sauce though. Empanadas are traditionally served hot from the oven with wedges of lemon.

4. Tomatoes
Spain doesn’t host ‘La Tomatina’ (the annual tomato festival held in the Valencian town of Bunol) for nothing. Tomatoes are a key ingredient in Spanish cuisine. From the fresh, ripe tomatoes that star in salads, to the processed versions in salsas and soups like gazpacho, tomatoes are close to the heart of every Spanish cook.

5. Paella
This is the number one way to feed a crowd. Paella – usually cooked in metre-wide pans over a gas burner – traditionally includes seafood, chicken, chorizo, peas, stock, garlic, onion, white wine and a garnish of tomato and lemon wedges. Available with regular white rice and also in a ‘negra’ (black) form with squid ink, one pan of paella can feed up to twenty people easily. Contact us today