Paella – it’s all about sharing the spirit of Spain 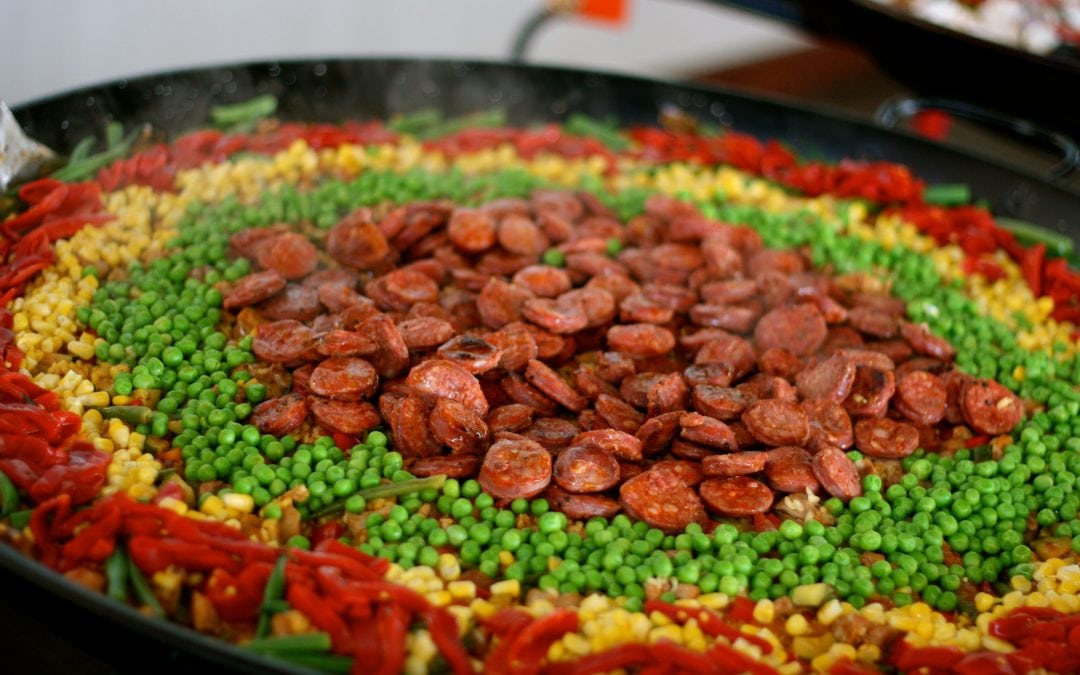 Paella… with its amazing colours, aromas and mingling of flavours, it’s a dish that nearly everyone should experience once – and if you have tried it once, then invariably you will fall in love with it, because it’s just so good and perfectly designed to share with friends and family!

But what exactly is paella, and where does it come from?

Paella (pronounced pay-eh-ya) is all about the impressive size of the pan, which is round, flat and wide, and seated on a wood fire or a special 3 to 4 rings gas burner. Paella itself is of course Spanish, and it’s pretty much agreed that it originates in Valencia, a fusion of the Roman and Arabic cultures which once dominated the region. The Romans brought irrigation, which in turn allowed the Arabic introduction of rice to flourish… and as a result Valencia still is seen to have the best paella in the world.

But that doesn’t tell us what’s in paella!

Of course, it must have a base of natural rice grown in Spain, which is cooked in a rich sofrito sauce, which is composed of a seafood or chicken stock which is coloured and flavoured with saffron. This is followed by seafood such as mussels, claims, prawns, scallops and lobster. Paellas can be mixed with the former and meats like chicken, Chorizo sausage, or traditionally rabbit can be used. Paprika is a must to accent the flavour. The paella is cooked over high heat, without much movement, and as a result the bottom layer of rice develops into a lightly caramelised crust known as soccarat – muy delicioso!

Traditionally in Spain, paella is served at the table in the pan on Sunday lunch, and eaten from the same pan – not on plates, as it means the beautifully congealed rice doesn’t get too broken up. Each guest starts at the perimeter and works towards the middle of the pan.

Paellas are not only a traditional way to celebrate, but they are fantastic in terms of serving them at your own fiesta, because not only are they dairy and gluten free, but you are limited only by your own imagination! You can put into paella almost any ingredient that will work well in terms of flavor combinations that you like… whether vegetarian, a seafood paradise or a carnivore’s carnival, paellas are a perfect way to feed a large group without breaking the bank or having to worry about dietary issues.

Check out our range of fantastic paella options here, and make Food Adventura your next party destination. Our personal chef will serve up a spectacle of flames, sizzle and delicious aromas, and look after the smaller details, providing recycling bamboo plates, cutlery and napkin, and a fully equipped mobile kitchen. We also provide professional waitstaff who go above and beyond their job description to ensure your guests are impressed, relaxed and enjoying themselves.

Say a big Buenos Dias to paella – and to Food Adventura – and experience the traditional way of sharing the spirit, flavours and warmth of Spain at your own celebration!