Albóndigas – Spanish pork and veal meatballs in a rich tomato 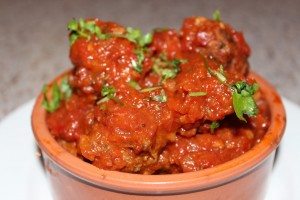 Meatballs have to be a favourite food in many cultures. They are very versatile in terms of ingredients, packed with protein and just delicious any way they’re served. In the Spanish culture, meatballs are called ‘albóndigas’ and they have a long and interesting history that spans centuries.

Al-Andalus also referred to, as Muslim Spain was a medieval Muslim cultural territory that was governed by the Moors during the period 711 to 1492. The Moors were of Arab and Berber descent and came from the North African country of Morocco.

Al-Andalus occupied most of the Iberian Peninsula during its peak, which of course included Spain. As a result, an abundance of Spain’s most distinctive flavours come directly from the North African palate of the Moors, most notably, the spices such as saffron and cumin as examples.

It is thought that albóndigas originated as an Arab or Berber dish and arrived in Spain during this period of Moorish rule. By the time the Spanish were finally able to reclaim their land, they had adopted a number of the Moors’ culinary traditions, many of which remain as their traditional foods today. However, they did make modifications to the recipes in a bid to make them their own. When it came to red meat as an example, the Moors had a preference for lamb. It is the inclusion of other meats that is one such modification the Spanish people made to their meals, hence one variation of the albóndigas recipe containing pork and beef.

The word albóndigas comes from the Arabic al-bunduq, which means hazelnut, and they were christened this given their resemblance to the small round nut. In fact, just for a little bit of trivia… many words for ingredients in Al-Andalus gastronomy start with an ‘al’ highlighting the influence the Arab language has had on Spanish culture even today!

Spanish albóndigas can be served as tapas or a main course and they are often served in a tomato sauce, such as in our recipe. They are quick and simple to make and now you know their history you can proudly share it with your guests the next time you have them over for a Spanish fiesta!